Rotary Year 2014-2015 “Light Up Rotary” herald a bright year for Rotary; but for the Rotary Club of Sta. Rosa Centro, we go a bit farther – it is a year that Centro is on fire!

This was the message during the 14th Handover and Induction Ceremonies of the Rotary Club of Sta. Rosa Centro held last October 27, 2014 at the Bellevue Hotel in Alabang.  The event began with a dramatic parade of the Rotarians, followed by the Council of Past Presidents, each one attributed with her term’s RI Theme.  Centro ladies paraded donning their lovely gowns colored yellow or fuchsia, the color theme of the event, and stunning accessories courtesy of Kath’s Handicrafts that are designed by Centro lady Michelle Baldemor.  After the past presidents, the outgoing President, Doray Lucero, walked the red carpet.

But of course, the lady of the night was Incoming President Arlene Arcillas, who emerged from behind the stage, to the tune of “This Girl is On Fire” as she joined the rest of the Centro Ladies on stage.

Hosted by popular model Gio Puccini and Centro Lady PP Leni Lantin, the program ensued, starting off with a welcome message from PP Maan Gonzales and a heartwarming Valedictory Address from Outgoing President Doray Lucero.  After a short AVP on the Incoming President and an introduction by Secretary Cheryl Lu, Incoming President Arlene Arcillas was inducted into office by District Governor Jojo de Guia.  This was followed by President Arlene’s Inaugural Address, wherein she recounted the poignant story of her journey towards becoming a Rotarian. 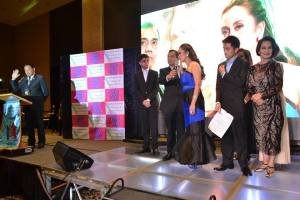 The other ceremonies were likewise unforgettable, in particular the induction of two new members, Marrianne Veracruz and Thessa Diaz.  After having been charged by PDG Chit Lijauco and inducted by President Arlene, Centro hymn “Sweet Rotary” was played while the Centro Ladies flocked to the stage to welcome their new members. Equally touching was the surprise birthday greeting to Rotarian Cecile Gabatan, who blushingly received a bouquet of flowers from the Centro Ladies.

The highlight of the evening was a special message from DG Jojo De Guia, who was very generous in his praises for RC Sta Rosa Centro.  The event also included the ceremonial sister club signing of RC Sta. Rosa Centro with RC San Pablo City South and RC Paranaque Metro (District 3830).

The night was not all ceremony and speeches, however.  During dinner, the Rotarians were serenaded by well-known crooner and ASAP sessionista Richard Poon, who gamely sang to the crowd’s delight and posed for photos while singing.  And just when everyone thought the program was about to end, everyone was surprised when no less than the Concert Queen, Ms. Pops Fernandez, showed up and sang a couple of songs; and yes, posed for pictures as well. 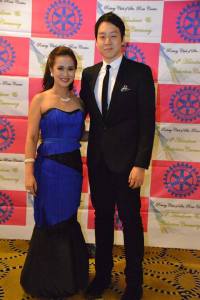 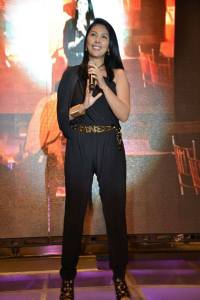 There was even an online photo contest, wherein guests can take photos and post them online with #centro14thinduction.  The winning photo went to PP Serge Atienza of RC Downtown Batangas City.