January 12, 2020,  Sunday.  The eruption of Taal Volcano has affected many families, communities, and provinces in South Luzon. In fact, the entire province of Batangas has been placed under a state of calamity where electricity and water supply have been cut off in several cities.  Certain areas were placed on lockdowns including the towns of Agoncillo and San Nicolas.

The Philippine Institute of Volcanology and Seismology (Phivolcs)  has downgraded Taal Volcano  from Alert Level 3 to Alert Level 2 on February 14 but we cannot downgrade the damage the eruption has done.

And so on February 25, 2020, heeding the call of sister club Rotary Club of Batangas Mid-West,  both clubs went on relief operation in the towns of Agoncillo and San Nicolas in Batangas.  Rice, food packs and cleaning paraphernalia were distributed.  We hope that in our small way, we have responded to their needs. 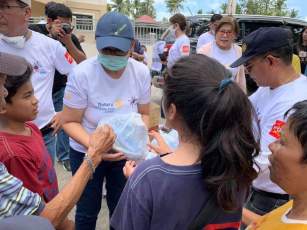 View all posts by Rotary Club of Santa Rosa Centro