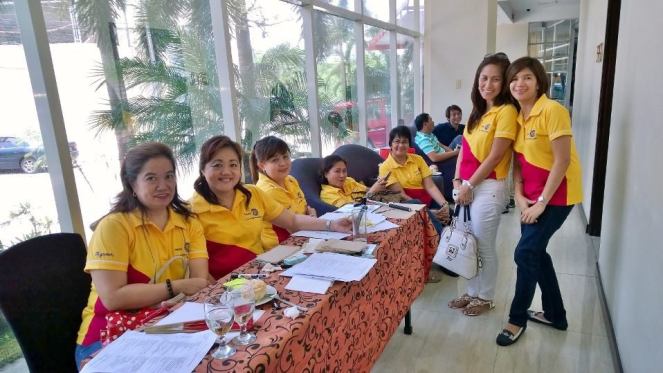 The YEP Welcome and General Orientation is a one-day event wherein District 3820 welcomes all the incoming students from different countries who will spend a year with their respective host clubs. Also in attendance are the outgoing Filipino students who will be dispatched to the counterpart countries and the returning Filipino students who have finished the terms of their exchange. Aptly, the students are called “Outbounds”, “Inbounds” and “Rebounds”, accordingly. The main objective of the event is to orient the students on the many aspects of their exchange, as well as inform them of what to expect, what to do, what not to do, and many more. A total of 10 Inbounds, 9 Outbounds and 4 Rebounds joined with their respective host club representatives or parents. 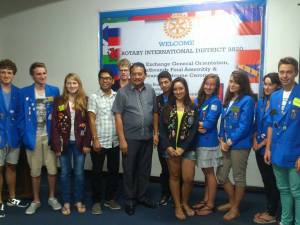 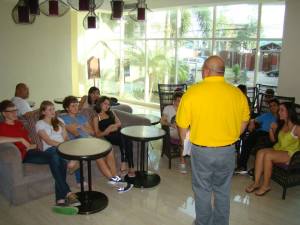 District Governor Jojo de Guia formally opened the event, followed by an invocation and the playing of the national anthems of Brazil, France, Germany, Mexico, USA and lastly, the Philippines. The welcome remarks of President Arlene “Mayor” Arcillas, who was indisposed that day, was read by Secretary Che Lu.

After a briefed introduction of dignitaries, the audience was treated to a cultural dance from the northern provinces. Soon after, the Inbounds and Outbounds were presented and endorser to the District Governor, who bestowed “Light Up Rotary” pins to the students.

DG de Guia delivered his special message to the participants, reminding the students to make the most of the youth exchange experience. This was followed by the introduction of incoming YEO Chair, PP Ed Mercado, and the turn-over of the chairmanship from outgoing YEO Chair, PP Precy dela Cruz. The new set of Youth Exchange Officers, headed by YEO Chair Ed Mercado were inducted into office by DG de Guia.

PDG Chit Lijauco visited the event together with staff from the Philippine Rotary Magazine (PRM). They conducted a photoshoot and interview of the students, which will be featured in the next issue of the PRM.

In the afternoon, the seminar proper ensued. Talks about the travel schedules, sexual abuse and harassment, 5 D’s of Rotary exchange, and the like. The group were broken down to have a more detailed and focused discussion.
In between the serious lessons, Dir. Mildred Mejino and AG Leni Ma conducted a lively group dynamics exercise for the students. After the tiring day, YEO Ed del Rosario delivered his closing remarks, and Yeo Chair Ed Mercado formally closed the event.

The day will not be complete without fellowship! AG Erick Diaz welcomed everyone to the night’s event, with AG Leni Ma at the helm as emcee. The Outbounds did an impressive rendition of an acapella song using paper cups ala Pitch Perfect, while Marlon Carnelle and Leo Teulade presented an exhibition number with a soccer ball. There was a “balut challenge”, with the male Inbounds gamely eating the “balut”, while the female participants winced and cringed but ate the delicacy anyway. The exchange students then formed a circle, dancing the night away.

RC Sta Rosa Centro wished the Youth Exchange students a fruitful and exciting tour, and that we are looking forward to seeing them this RY 2014-15!

View all posts by Rotary Club of Santa Rosa Centro